I thought this day provided the perfect opportunity to think about celebrating spring.  Spring is my favorite time for nature study, because there is So Much to learn.  Here on the farm, all kinds of awesome spring things are happening.  So I have to get my boys outside to get my teaching on.  You should, too.

I mean, use your own kids.  Mine are taken.

Dr. Seuss Day kicked off the greatest month of the year, National Reading Month.  You know me, anything that celebrates reading is top of the list.  It’s the curse of being a Lit Mama.

I’ve often talked about the importance of reading, so I’m not going to bend your ear too much here.  If you want to celebrate national reading month in good form or want to know why you should, check out my posts The Joys of Guided Reading, Teach Your Children Well, 10 Rocking Advantages of Reading Aloud, or 5 Ways to Love Your Library.

Mostly, this month is about teaching or reminding our littles to love literature in all its forms.  To buy them new books, take trips to the library, spread out on the floor with a stack of picture books and read together, start a new chapter book as a family.  It’s about loving stories and the written word.  It’s what we do.

My Reading Journey is a book log where your little can track each book he’s read for the month.

These Belongs To book labels will make your child feel like each book is her special place.

Finally, here are some Dr. Seuss bookmarks so your littles can keep their places in all those incredible books.

I hope they make your littles smile.

Is there anything cuter than a fuzzy little rabbit nosing about in your clover patch?  Or a squirrel carefully checking out his surroundings before burying a nut under a pile of autumn leaves?  If we think they’re cute, imagine what your littles think.  These adorable rodents give us so many things to teach about: life cycles, mammal diets, winter habits, finding food in spring, saving up for winter.  You could easily combine a study about squirrels with a harvest lesson and have a week’s worth of interesting projects and discussions. Because we associate rabbits with spring (thanks to that whole Easter/Ostara thing) you could do the same with rabbit and planting studies.  But you’re going to want to have some literature to go along with those lessons because why wouldn’t you?  So here are some Lit Mama suggestions that I’m sure you and your littles will love.  There are A Lot of them.  I will try to keep it to 6.  Wish me luck.

Have I ever told you about being very small and going to visit my cousin who belonged to a book club?  For a while she got a new book every couple of weeks.  I thought it was the most amazing thing I had ever seen.  We used to spread all those delicious books out on the floor and pick the ones we wanted to read (to be fair, we alternated picks so I had a decent chance of getting at least one of my top picks, and we traded as finished them).  Miss Suzy was one of those books.  It is a wonderful tale about a grey* squirrel who gets run out of her adorable house by a bunch of red squirrels and winters in a dollhouse in the attic of an old house.  There she meets a band of toy soldiers who eventually help her get her tree house back.  What I loved about it as a child was the acorn cups and twig broom and firefly lamps in Miss Suzy’s tree house.  I wanted to have That Kind of House.  I think it will spark your littles’ imaginations just as much.

*I know, I still spell grey with an ‘e’ and no one but the Brits does that anymore.  That’s because I was taught, by a very adamant 2nd grade teacher, that spelling it with an ‘a’ was wrong and would get marked as such on the weekly spelling test.  Her vehemence stuck with me straight through the misspelling on the Crayola Crayon that changed the spelling here in the States.  So color me British.  Grey is spelled with an ‘e.’

Leo the Lop by Stephen Cosgrove

Leo the Lop is another book I remember well from those visits with my cousin.  I loved the Serendipity Series for Robin James’ amazing illustrations, but this particular story is a wonderful reminder to littles to love themselves for who they are and not try to be someone else.  I have a female lop-eared rabbit now who is called Leo.  Because you can’t have a lop and not name it Leo.  It’s in the rules.

Poor Morris.  All he wants is to share the Christmas toys with his siblings, but none of them will trade their cool toys for his stuffed bear.  So he spends a disappointing Christmas morning until the disappearing bag changes everything.  This is another childhood favorite of mine, because I loved it when Morris finally got to play with his sister’s makeup and his brother’s hockey gear, but also because I wanted a disappearing bag.  Because that would be cool.  To, you know, just disappear.  Hm.  Sometimes one of those would come in handy even now!

The Complete Tales by Beatrix Potter

Are you kidding me?  Peter Rabbit, Benjamin Bunny, Squirrel Nutkin… Lots of wonderful and beautifully illustrated stories here about squirrels and rabbits both.  This would be an amazing addition to any library, let alone any unit study.  I still call all the wild rabbits Peter when I catch them in my garden.  Because they are just as wily and persistent as Peter ever dreamed of being.

Watership Down by Richard Adams

I can’t resist recommending this book any more than I can stop telling you to read To Kill a Mockingbird.  The wondrous thing about Watership Down is not only is it a great story with an intriguing message, your littles can learn quite a bit about rabbits in the reading.  Mm hmm, Watership Down.  Read it. Several times.

The Rift of Rime by Steven L. Peck

If your littles enjoy rich fantasy, you can’t go wrong with this awesome squirrel tale.  (See what I did there?)  Pinecone, the hero of the story, is a poet, so that should say enough about it.  But the author is an ecologist and a bioethics teacher and while the story is about warriors it is also about nature, both squirrels’ and humans’.  Very imaginative with an amazing message about war, this book is sure to draw your littles in.

I did it.  Kept it to 6.  But can I just mention that Stephen Cosgrove has a squirrel book in the Serendipity series, too, called Squeakers?  Ok.  I’ll shut up now.

Oh, and that whole spreading the books out on the floor and spending hours trading and reading them together?  I’ve made it a point to make that a habit with all my littles.  In fact, that sounds like a good way to spend a summer afternoon…

I learned two new words this week.  It’s cool because it doesn’t happen very often anymore (unless it’s a medical term or foreign language), so I always share the word with my whole family.  Since these two words were from completely different sources and yet oddly related, I thought I’d share them with you.

The first is petrichor.  Know what it is?  (I didn’t even know there was a word for it, let alone that it was petrichor.)

It means ‘the smell of rain.’  I learned this today on the earthsky website, which remains one of my favorite internet discoveries.  You know, that smell when you suddenly know it’s going to rain any minute?  It’s caused by an oil that is released from the Earth into the air before rain begins to fall.  How cool is that?

When Middle was much smaller, we were leaving for a field trip one morning and as he got into the car he said, “It smells like fog.”  I loved the idea of that–the world smelling like fog.  I told him I had always been able to smell when rain was coming, and maybe he could smell when fog was coming.  Turns out, we were both smelling petrichor.  The word comes from the Greek petra (stone) and ichor (the ethereal blood of the gods).  Heavenly Blood in the Stone?  I love language.

This cool picture is actually the view from my front porch last night.  This fog popped up with no warning, no petrichor or creeping.  Not there one minute, there the next.  My beautiful husband commented that he had seen this movie, and it didn’t turn out good for anyone.  The whole while I was snapping pics and thinking of the word I had learned earlier in the week.

Isn’t that delicious?  Some of you may already know it, I had never heard it.  Deliquesce, as in ‘dissolve into liquid.’  I read 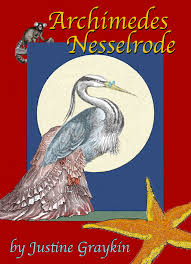 it in the novel I’m reading, Archimedes Nesselrode by Justine Graykin, a lovely, magical book that I am completely enamored with and hope will never end.  The line was, “I, myself, might simply deliquesce like a bubble on a summer breeze!”  Again, with language, especially when well-used.  Deliquesce like a bubble on a summer breeze?  I don’t know about you, but that’s how I’d like to go.  I was laying in bed reading and I called for the Littles to get out of bed and come and hear this word.  They liked it as much as I did, and Middle even decided to make it a move in one of his video games.

Everything is a learning experience in this house. Even for me.  So I dare you to use these words today.  If you live nearby, you should have no problem finding a chance to use petrichor.  And everyone should say deliquesce every single day.  Just because it’s fun.

I use cookies to ensure that you get the best possible experience on my website. If you continue to use this site I will assume that you're okay with that.OkRead more